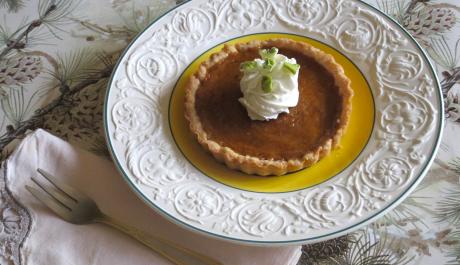 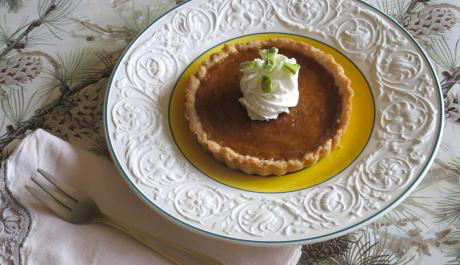 A classic pie which is not too sweet due to the natural flavors of the apple cider reduction in the filling. Try a shortbread crust, easy to prepare with a tender, melt-in-your-mouth texture.

Partially bake the shortbread pastry. See instructions in recipe.*
Make filling: In a two quart pot, boil the cider over medium-high heat with a cinnamon stick until reduced to 1/2 cup. Watch carefully at the end. Add the sugar and butter, reduce heat, and stir with a whisk until the sugar has dissolved. Remove from heat, cool in pot, discard the cinnamon stick.

To the pot add the pumpkin puree, half and half and 3 egg yolks – place two egg whites in a separate bowl (they will be whipped). Add all spices and salt, whisk to blend. Whip the egg whites until soft peaks form. Fold into the pumpkin mixture. Fill the pastry with the filling and bake in the oven for 25 minutes, or until the filling is set, but has not browned.

Remove from the oven and cool. Before serving, Whip some cream and pipe in rosettes over the pie. Garnish with dehydrated apple pieces with the skin on (it’s pretty!)