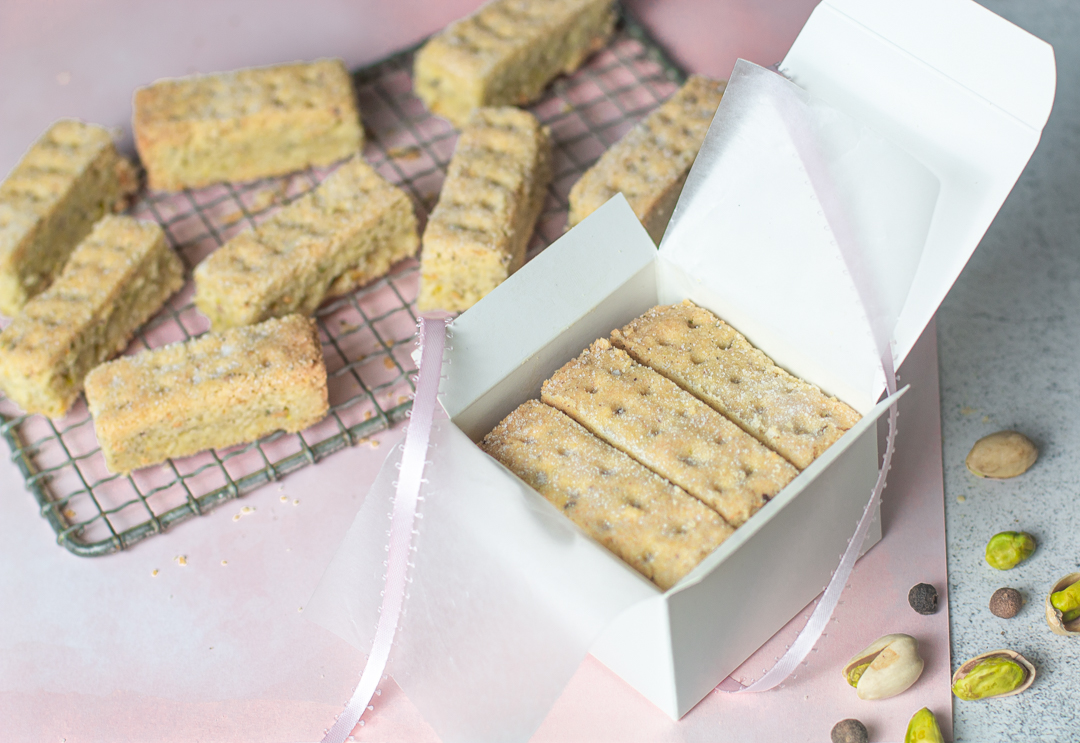 A delicious melt-in-your-mouth shortbread you will love! And wouldn’t Rebecca from the Ted Lasso television series approve?
Here are traditional British Biscuits, in America they are Shortbreads – revived with nuts & spice.

While watching Apple TV’s series Ted Lasso, I would wonder as Ted (Jason Sudeikis) drops off a little pink box of biscuits to Rebecca (Hannah Waddingham) what they actually taste like… and – are we to believe Coach Ted bakes these himself every day?

Shortbread tastes so good because of butter, glorious butter, and just few ingredients. Few cookies fill your mouth the way shortbreads do. And the flavor! One bite of a real shortbread cookie, with its fine crumb and rich sweet taste, is confectionary bliss.

Shortbreads are a snap to make!

Hint: Do not overwork the shortbread dough, it will become chewy and even tough: you don’t want to overwork the dough.

Flavoring the Shortbread ~ I choose Allspice & Pistachios…  a nice zesty add-in combination.
The shortbread will still have that trademark buttery taste, just enhanced.

Allspice is was so named because the flavor of the dried berry resembles a combination of cloves, cinnamon, and nutmeg. Native to West Indies (primarily Jamaica) and Central America. An important ingredient in Caribbean and Mexican cuisine. I love adding it to spice blends, especially my Jerk Marinade.
Try allspice to zip up your cooking – and add a dash to your holiday baking!
Pistachios have an addictive flavor – they are buttery soft and mildly sweet. Their bright green color adds beauty to recipes and baked goods.

A little Shortbread History:
Walkers Shortbread founded in 1898 is a true Scottish classic. Their products contain absolutely no artificial flavorings, colorings or preservatives.

Shortbread or shortie is a traditional Scottish biscuit made with butter, flour and salt as the main, and sometimes the only ingredients. It is the most basic recipe for a cookie that you can find.

Generally associated with and originated in Scotland, but due to its popularity it is also made in the remainder of the United Kingdom, and similar biscuits are also made in Denmark, Ireland and Sweden. The Scottish  version is the best-known, and is widely exported around the world.

What does short mean? The large amount of butter is what makes shortbread short: the term short, when applied to biscuits and pastry, means crumbly, like shortcrust pastry should be.

Types of Shortbread:
Shortbread usually comes in three different forms: small round biscuits, fingers or large rounds. To make the fingers, dough is cut into a large rectangle and the fingers are scored with the back of a knife so they can be broken up easily after cooking. A pattern made with fork marks is always made too – I use the tip of a chopstick.

Last words:
I had fun interpreting these Ted Lasso shortbreads (ok, they call them biscuits!) I did hear Hannah Waddingham (Rebecca) in an interview speak about season 1’s biscuits, how they were undesirable and bland. Season two the recipe was reworked, an finally she enjoyed eating them. I thought to jazz them up a bit, and love these Pistachio – Allspice Shortbreads!
Milk Bar, NYC wrote a recipe in the Ted Lasso style, yet contains 3 egg yolks and a grand amount of sugar, so these might be tasty, but definitely not a classic shortbread. 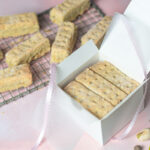