A Big Batch Side-Dish That Pairs Well With All Your Passover Main Courses.
Fluffy Quinoa with Onions, Leeks and  Spring Veggies, adorned with Fresh Mint – all will love!

Add lots of mint leaves at the end… not just a garnish but part of the dish.

Quinoa for Passover… Why Not?

I always have had a Matzo-overload at Passover! First the Matzo Ball soup, next the Gefilte Fish, then some broken Matzo (especially at the Seder.) I’ve had enough! Guess that’s why I do not care for Matzo kugels (don’t even get me started on Toffee Matzo for dessert!)

Quinoa, the grain-like seed grown in South America, is Kosher for Passover when processed with special OU Passover supervision and bearing the OU-P symbol.

Sephardic Jews, whose roots trace back to the Iberian Peninsula, North Africa and the Middle East, have long considered these foods kosher for Passover. (Which makes sense, given that chickpeas and other legumes feature prominently in the Israeli diet.)

Then, add turmeric and Vegetable Broth then the Quinoa. Cook until the broth has absorbed and it is fluffy.
Sauté the veggies, add leeks and garlic until tender-crisp. Fold into the pilaf with fresh mint leaves and serve!

Recipe is adaptable – use other vegetables you love! 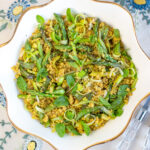 Make the Quinoa with Onions:

Cook the Vegetables for the Pilaf: