A rare but delicious delicacy – Pumpkin Swordfish is in season (well, kind of) and it’s the best swordfish you ever ate!
With a gorgeous “pumpkin” color ~ it’s a sweeter variety that is more buttery in flavor with a juicy texture.

Of course you can use this recipe with any swordfish… I’m just showing off my catch! 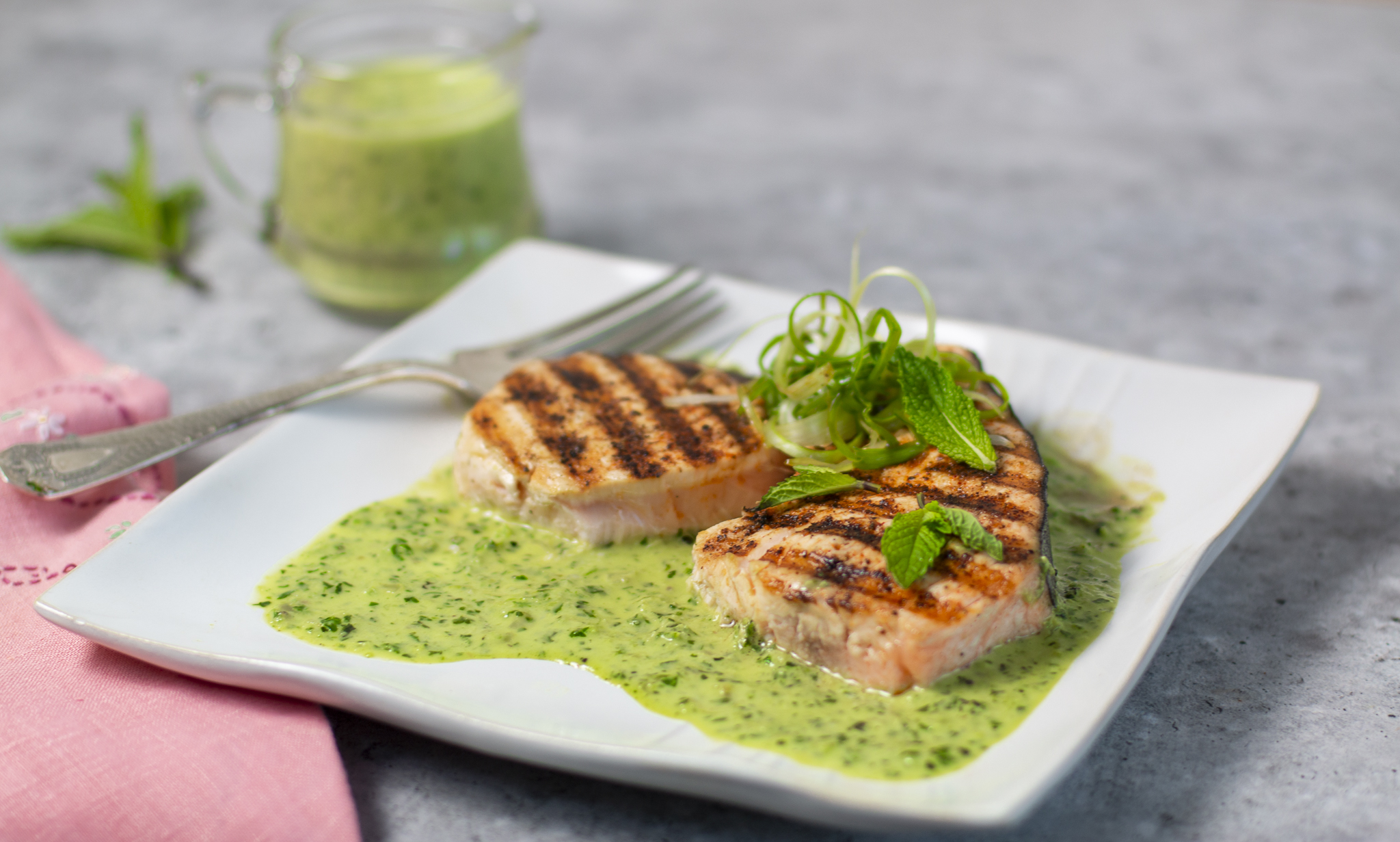 The availability of “Pumpkin” swordfish is tricky, when fishermen catch this rare variety – it’s a surprise!

I lightly seasoned my fillets, not to overpower the natural sweet taste of the fish and grilled it indoors using a cast iron grill pan (instead of my BBQ ~ winter in CT is cold!) I plated it with a delicious, creamy Green Masala Sauce.

The sauce is started by making a fresh Green Masala Paste in the blender with cilantro or parsley, fresh mint, ginger, garlic and chiles.
This paste is then cooked with onion and garam masala seasonings*, then heated so the flavors pop – and adding coconut milk for a creamy consistency.

This is where I scored this fish:

I found my Pumpkin Swordfish this past weekend – caught in Cherry Point, South Carolina and brought to my local Farmers’ Market in Greenwich, CT by The Local Catch.
Rich, the owner of The Local Catch, chatted with me about this uncommon fish.
A little background –  The Local Catch is based in Rhode Island, catches and sells fish from their boat and neighboring fishermen friends in the region. Expanding his sales, and excluding middlemen, he has been selling at numerous farmers’ markets, and this has been a great boost to his sales.
Yay for us who live near one… fresh caught fish – and on your table the next day! And, you help your local commercial fishermen stay in business.

Captain Rich explained “the best time of year for local swordfish is July through December, but occasionally we do get some by-catch throughout the year.” Does the color of the swordfish meat can vary depending on what the fish has been feeding on?  The orange color of pumpkin swordfish some say indicates that it has been feeding off of krill and shrimp for its distinct color.
Although Rich thinks it is its own subspecies, and I’m leaning toward that theory too. Could this catch also abundant when the moon phase is high? Another theory I’ve heard!
He never knows when a fisherman will bring in “pumpkin” sword – and it can sell out quite quickly, with the price tag of $21 a pound… it’s a steal for the quality.

Why is the orange color a valued pick?
The taste! Pumpkin Sword is known for its sweet taste and tender, juicy meat – see what a beautiful sheen it has!
Some say it’s almost like getting a very high-end steak that melts in your mouth.” Swordfish meat is relatively firm, and can be cooked in ways more fragile types of fish cannot.

Green Masalas are used in curries and stir-fries. I make a Green Masala Paste with green herbs and spices, and make a sauce with it. Nothing can beat home-made masalas, especially the flavors they impart when they are freshly blended.
Masala is a kind of mixed spices used in a curry to add more flavor and taste to it.
The word masala simply means “spices,” and garam translates to “hot.” So – garam masala is a blend of ground spices used extensively in Indian cuisine.

*Garam Masala Seasoning is a vibrant mix of spices with a slightly warming, sweet, pungent taste which includes:  coriander, black pepper, cinnamon, cloves, black & green cardamom, mace and bay leaves. I bought mine in whole form from Kalustyan’s in NYC, and ground it in my spice grinder.